Today at The Wall Street Journal's D: All Things Digital conference, Palm, Inc. introduced attendees to the latest features of the Palm webOS platform, including Palm media sync, the integration of Twitter in universal search, and a beta version of its App Catalog. Jon Rubinstein, Palm executive chairman, and Roger McNamee, Palm director and co-founder of Elevation Partners, debuted the new webOS features, which will be available on the new Palm Pre phone when it launches June 6 on Sprint.

Palm media sync is a feature of webOS that synchronizes seamlessly with iTunes, giving you a simple and easy way to transfer DRM-free music, photos and videos to your Palm Pre. Simply connect Pre to your PC or Mac via the USB cable, select "media sync" on the phone, and iTunes will launch on your computer desktop. You can then choose which DRM-free media files to transfer.

"We designed Palm media sync to be an easy and elegant way for you to take the content you own and put it on Pre, and it's just one of the ways we think you'll be amazed by webOS," said Rubinstein. "We've had an overwhelming response since we introduced Pre at CES, and with availability just days away, we can't wait to let everyone see firsthand what the excitement is all about." 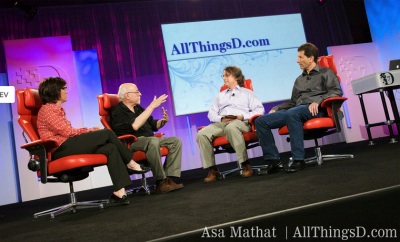 Pre also acts as a mass storage drive, letting you side-load your media content. Once connected to a computer using the USB cable, Pre will appear as a drive on the computer desktop. You can drag and drop music, photos or video files onto your Pre, or drag files from your Pre to the computer. And, just like a digital camera, Pre works directly with your computer's default desktop photo software to seamlessly import photos captured with Pre's built-in 3-megapixel camera.

In addition to listening to music transferred from your desktop, you can use the on-device Amazon MP3 store to purchase individual songs or full albums over-the-air. You can search by artist, song and genre, and preview and purchase music files. You can then download purchased tracks when you're connected to a Wi-Fi network.

Palm also announced that Twitter search is integrated into webOS universal search. Universal search is about finding what you want quickly, whether it's an on-device contact to call, a place you're trying to get to, or a Wikipedia article for encyclopedic information. Just start typing and Pre will figure out if you're looking for a contact, an application, or even let you search the web via Google, Google Maps, Wikipedia and now Twitter. Universal search uses Twitter's search service to sort through real-time current events and news, so universal search now covers every aspect of search on the web: general info, location, encyclopedia, and news.

Twitter's ability to show what's going on right now is a perfect fit for what universal search and Pre are all about. You don't have to be a Twitter user to benefit from Twitter in universal search. It's available for all users, even if they don't have an account, so anyone can keep on top of real-time news and the latest trends.

Rubinstein and McNamee also gave conference attendees an advance look at the beta version of the App Catalog, which will be available on Pre at launch. The beta version will feature applications from developers such as AP News, Citysearch, Fandango, Pandora and uLocate.

"We've received excellent feedback from participants in the Mojo SDK early access program and look forward to the SDK's public release. Developers are very enthusiastic about the platform's ease of use and industry-standard development model," said Rubinstein. "We're excited to launch Pre with the beta version of the catalog, which will give a taste of how the overall webOS ecosystem will work."

The App Catalog was demonstrated at the conference using Fandango's webOS application, which takes advantage of Palm Synergy, a key feature of webOS. It also uses Pre's location-based services to find theaters near you, and lets you watch trailers, buy tickets, add showtimes to your calendar and get directions to the theatre. Also included in the beta App Catalog will be Pandora, which makes use of the platform's multitasking capabilities, running elegantly in the background while you're using other applications. It highlights a unique aspect of the notification bar that lets you know what song is currently playing, and control pause and play without having to go back into the application.

The Palm Pre phone will be available from Sprint on June 6 for $199.99 with a two-year service agreement and $100 mail-in rebate.

When the article above says "You can then download purchased tracks when you're connected to a Wi-Fi network." it implies that Wi-Fi will be required for significant data downloading. Does that also apply to apps like Pandora? What abilities are relegated to Wi-Fi connectivity and which are fully enabled on 3G?

But for those addicted to iTunes already, looks like the Pre can be used to get your fix. (Although there is help for your problem too.)

It rocks... if you live in the US. Which makes me wonder - will international Pre users be able to access the store too, or is Palm going to come up with country-specific solutions?

I hope it's the former. Given Pre's possible Telstra exclusivity here in Oz, it might wind up being tied to their craptastic Bigpond Music service - an outcome that would not leave me well pleased.

freakout wrote:
It rocks... if you live in the US.

So, do I understand correctly that you can't purchase music from Amazon MP3 store? Seriously? I don't live in the US either, and I surely can. Bummer, dude.

On its opening day, I was able to buy a few tracks. But I haven't been able to since. Just get the message: Please note that AmazonMP3.com is currently only available to US customers.

Does anyone know if Palm licensed technology from Apple, or are they exploiting a hole in itunes.

If the latter, this "feature" could be short-lived.